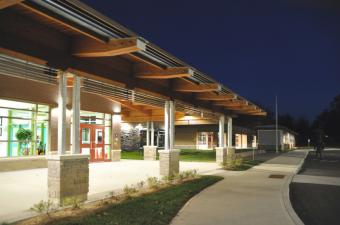 This new 480 student school replaces a smaller capacity existing school that, in part, included the original 2-room school built in 1895. In commemoration of the original school, the brick facade was carefully dismantled and incorporated into the new design, including four school bells. To accommodate the school schedule, the new school was constructed behind the existing school to near completion during the school year. During the summer prior to opening, the existing school was removed allowing the parking lot and landscaping to be completed, and final completion of the new school.

Designing to save you time & money!

We provide proper project planning, suggest numerous design considerations, material selections, and durable detailing to all of our Clients. If there are changes to the scope of the project they are more easily done while on paper than on the job site. We often provide 3D modelling as a tool to clearly communicate with our Clients throughout the design process. Our final design drawings and project specifications capture the full scope of a project and provides the opportunity for competitive tendering to qualified Contractors.